The Innocence Code is a simple ten Article Code that brings the message forward to the present time of the importance of protecting the innocent.

Quote: “However, it is more important that innocence should be protected, than it is, that guilt be punished”.

That quote is from the 1700’s from people that knew and remembered the command from the heavens.  This message has been lost and the chief of the Fraternal Order would like to do the message some justice and re-present it to this generation with whom have lost the message altogether.

The same message is all through the bible and in old law books to take great steps to protect the innocent which gives the courts the true authority to punish the guilty and cruel.  The authority comes from the Holy Spirit Realm to stop and punish those that do not have empathy nor remorse for their cruel actions towards others.  People have been witnessing sociopathic behavior for the last 50 years and have grown indifferent towards cruelty.

The message has left the country and is now being stated once again through the Fraternal Order of the reign of the heavens society. This message and command must be obeyed otherwise hell is repetition.

The following is a copy in pdf of “THE INNOCENCE CODE”.  CLICK HERE! 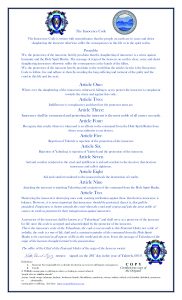